Technology takes on translations – but who will win?

The translation industry continues to be filled with new technological advances designed to speed up and reduce the cost of translations, with the term ’free translations online’ being searched regularly.

Free online tools such as Google Translate and Bing Translator have been around for some time and more recently Smartphones such as the iPhone and android handsets are offering translation application services, which are constantly being developed.

The latest app launched this year is a real-time phone call translator app, which “allows people in Japan to speak to people over the phone with both parties using their native tongue.” The app will initially convert Japanese to English, Mandarin and Korean, with other languages to follow.

However, Burravoe is seeing more and more cases of these applications delivering obscure, inaccurate and inconsistent translations. The apps may be adequate for simple one-word translations using a standard dictionary for that language but these systems are in no way advanced enough to return sufficient results for important, lengthy documents.

Burravoe occasionally conducts spot checks on certain words using Google Translate, which has revealed some interesting results. The word ‘Butterfly’ was once translated as ‘Throttle Valve’ and the phrase ‘On the other hand’ came back as ‘Goats Leg’?! Much to the team’s amusement!

The problem with these new ‘whizzy’ systems is that they are unable to determine the context of the document being translated or understand shortened versions of words such as temp, which could mean temperature or temporary.

We may be biased but we say ditch the free translation apps and speak to Burravoe!

Visit our Facebook page here to see examples of when translations go wrong after using translation apps and you may think twice about searching ‘free translations online’ again! 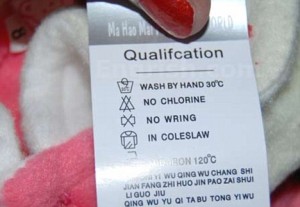 Perhaps we have been washing our clothes incorrectly all along? Do they know something we don’t?!